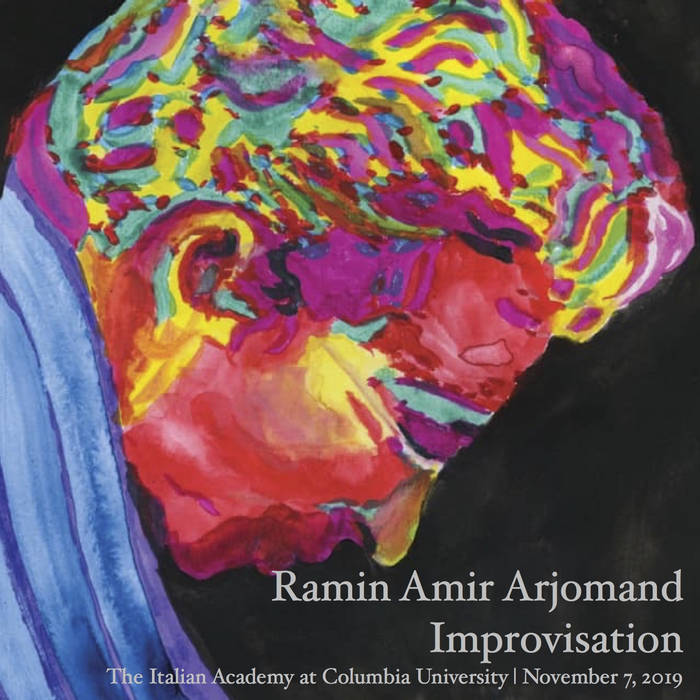 "My take on Ramin Arjomand’s extraordinary improvisations was skewed by the context in which I first heard him perform. It was an impromptu concert at Columbia to protest Trump’s travel ban, February 2017, where it was perfectly natural to hear this solitary Iranian pianist’s freedom bearing down hard on the politics of the moment. How could a Muslim-American artist do otherwise? Ramin’s brief performance that evening seemed commensurate with Trump’s malice, and that was a relief. Nothing else had.

His playing reminded me of the late Cecil Taylor’s, the legendary pianist with a built-in deep well filled to the top with musical ideas and expressions of his own. I saw him perform solo downtown just one time before he kicked off. He came out to the stage looking like he’d just been making it with some fan or friend backstage, the powder on and under his nose worn proudly like a totem or a tribal tattoo. One had no clue what might have been transgressing in that old, dark, dangerous-looking man’s soul, but I was grateful to have been turned on to him, and in the nick of time.

Ramin Arjomand is blessedly young, and he appears to be safely set up in an Ivy League situation fortuitously near Harlem, so barring the end of time, he may, one hopes, be around for a good long while, and he’s fully primed as a music artist.

As a presenter of music events at Columbia’s Italian Academy, I naturally sought him out and asked if he had any Italian tricks in his bag. Did he. Not just Scelsi, but early Scelsi, early and middle, and he had the genius to close his recital without fanfare, which began with this barnstorming improvisation, by laying down a sublime Bach fugue.

One is compelled to ask oneself, upon taking in such a program—his half-hour improv, a brief break, the two big Scelsi suites, 4 Illustrations of 1953 and Poemi from the mid-1930s, followed without a pause by the Bach—what is this man putting across here? It suggests meaning of a kind, but what might it actually mean? That’s between each of us and our respective higher power, I guess.

But the improvisation does seem to narrate some sort of a quest. It’s a story of struggle, I believe, a searching for authentic (musical) existence, trying things out on the fly, with no time for hesitation or regret—what he gets himself into he must get us all out from under before sunrise.

And then, cold as night, with a windy rustle, that old sunrise comes up and we’re on to another day."

Ramin Amir Arjomand is a composer, pianist, improviser, and educator based in Brooklyn, New York.

Bandcamp Daily  your guide to the world of Bandcamp

Featuring Oakland sounds from the Smart Bomb collective and Samplelov.